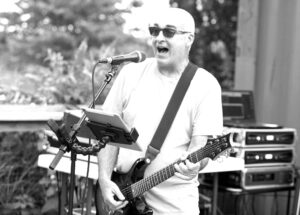 Bob Reuther became passionate with music at a young age  after seeing the Beatles on Ed Sullivan. He started playing in bands in middle school .

Bob gigged extensively in the band, Crossroads in High School and the band Whale in College. Upon graduation from the University of Delaware and a year and ½ stint on the road with Whale,

Bob started a career in Professional audio and has worked for major audio manufacturers. Bob was a member of Boys Night Out for many years. He also has a home project studio and is finishing up a Music from the 60s retrospective.